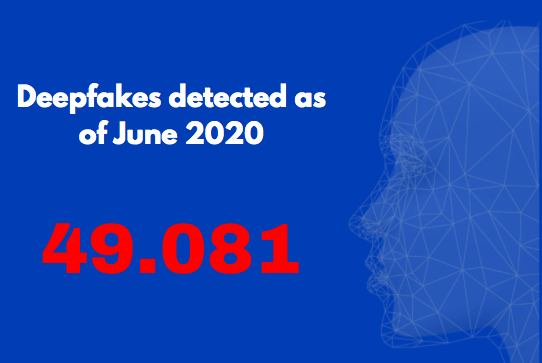 In September 2019, we released our State of Deepfakes report, the first research of its kind providing data-driven analysis of the deepfake landscape. Since we collected this report’s data in July 2019, the technologies and activity surrounding deepfakes have continued to rapidly evolve. This blog post outlines some of our continued data analysis tracking deepfakes’ evolution as of June 2020.

As well as monitoring the overall growth in the number of deepfake videos online, our analytics also capture key information on the individuals who are targeted in these videos. Our analysis from July 2019 found the vast majority of targets (over 95%) worked in the entertainment industry, with a remaining small percentage of targets coming from business, news media, and politics. As of June 2020, entertainment is still the most targeted industry at 62.7%, which combined with the newly separated categories of fashion (21.7%) and sport (4.4%) totals 88.9% of all targets. Of the 62.7% of targets from the entertainment industry, we identified a notable increase in the number of Instagram, Twitch, and Youtube personalities being targeted. We also identified an increase in targets from business (4.1%) and politics (4%) backgrounds.

Our July 2019 research found individuals from a wide range of nationalities were targeted in the deepfake videos we identified online. The majority of these videos featured targets from western countries (USA and UK) with a notable number of videos also featuring South Korean and Indian targets. Our June 2020 analysis presents a similar picture of targets’ nationality, with USA and UK nationals making up a slightly lower (61%) majority of the total unique individuals targeted. South Korean, Indian, and Japanese nationals also make up a significant proportion of targets, a finding that correlates to our research observations that deepfake activity continues to grow in Asia.